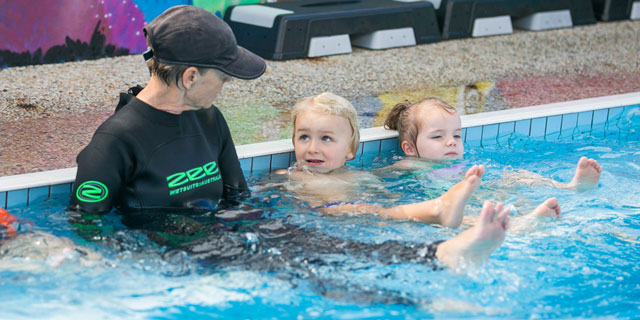 17 Oct Can swimming make you smarter?

Posted at 06:46h in Swimming education by Gina

The landmark study will monitor thousands of children who learn how to swim early and whether that translates into higher scores in the classroom.

He wants to prove that swimming does help children learn in order to encourage the Federal Government to subsidise swimming lessons, as Stephanie Smail reports.

STEPHANIE SMAIL: Swimming coach Lawrie Lawrence has been teaching children how to swim for 35 years.

LAWRIE LAWRENCE: Babies come into this world with billions of neurons and they need stimulation because that’s how they learn. They learn by sight, sound, taste, touch, smell.

Now water is the perfect medium to stimulate the senses because as you immerse a baby in the water it covers their whole body and as you move the children through the water they experience different sensations. Plus the parents are there to communicate and talk so it’s the perfect medium.

STEPHANIE SMAIL: Lawrie Lawrence and others in the swimming industry approached Professor Robyn Jorgensen at Griffith University to find evidence that teaching babies and young children how to swim, can help them develop intellectually.

ROBYN JORGENSEN: The thing that’s already striking us is that with swimming it’s the first time they’re faced with formal instructions. So they’re already being exposed to the kind of things that we do in school where we ask the child to sit down, look at me, listen to my instructions, do what I’ve told them to do.

So it’s happening much earlier than say if the kids go to gymnastics they already have to be able to walk and tumble and things like that, whereas in swimming it’s tailored for their physical development.

STEPHANIE SMAIL: The research team will study 10,000 children across Australia, New Zealand and the United States for the next four years, interviewing parents and observing children in the classroom.

Lawrie Lawrence says the four-year-olds he’s teaching in Brisbane this morning are the perfect example of how swimming lessons aid a child’s development.

LAWRIE LAWRENCE: They’re starting to recognise colours, numbers, they’re starting to experience social interaction with other kids. As they achieve skills they get a great feeling of self esteem so they become more confident.

STEPHANIE SMAIL: The swimming coach says the study could be proof he needs to convince the Federal Government to pay for swimming lessons for families who can’t afford them.

This is a four-year longitudinal study of kids who have learnt to swim at an early age. We believe this should be available to every Australian child.

STEPHANIE SMAIL: Professor Robyn Jorgensen says swimming lessons are shaping up as a valuable addition to a child’s early education.

ROBYN JORGENSEN: We’re already seeing that the early swimming is actually a fun environment where the children are not threatened but they’re being exposed to what they need to know in terms of school preparation.

We believe that aside from the swimming showing that the students are likely to be enhanced in their development that it’s also a very good way for preparing students for school.